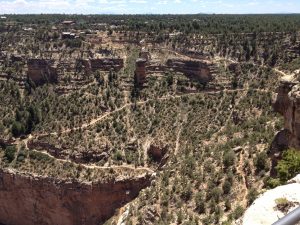 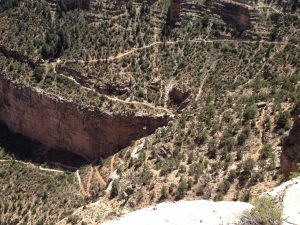 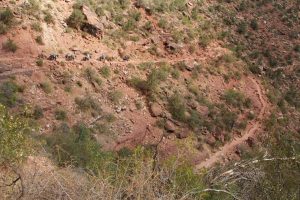 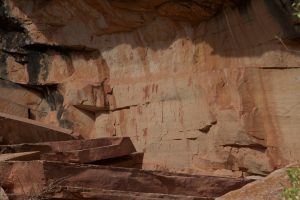 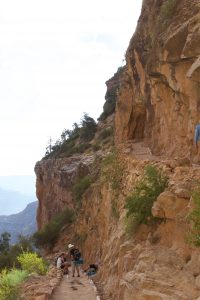 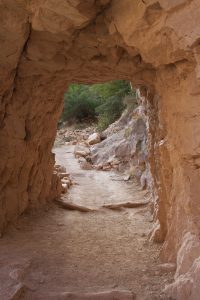 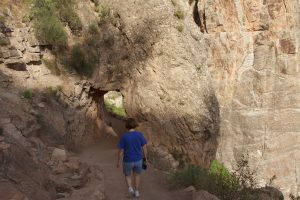 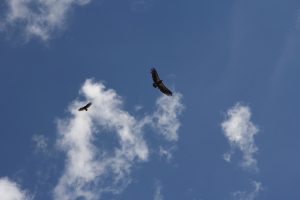 Awesome day at the Grand Canyon! We got up pretty early and started to go down the Bright Angel Trail for a short hike at about 7:30. It was beautiful, and at first still rather cool and very pleasant. Mark had not only his camera, but also the GoPro on top of his walking stick, taking pictures every 5 seconds, so we had 1,800 random photos at the end in addition to the ones he actually took of the trail, the canyon, and the impressively large California Condors riding the thermals overhead! We went a little bit past the 1.5 mile-point, where the first restroom / water stop is–far enough ahead to overhear the guide of the mule “train” that passed us point out some Native American petroglyphs we would have otherwise missed. Then we turned back and went back up the trail, for a total of about 2 hours and a measly 3 miles, but because it is so hard to go back up, and because it was already getting hot at 8:30, we were still glad that that’s all we did. We would have loved to go further — the views are so awesome, and the trail is so much fun, with all the different formations and the entire scale of things — but I think we would have wigged out. We walked around a little bit once we were up on top, and then had a very early lunch at 11:30 at the bright angel lodge, and went for a small hike and some off-and-on bus stops on the Rim Trail. That was a lot of fun, and although the buses were crowded, they were also airconditioned and run every 15 minutes. We walked the part of the rim trail that goes to Maricopa point, from where you can see the Grand Canyon Village and the Bright Angel Trail beneath it, so we could see where we walked. We then rode to Hermits Rest at the end of the trail, and then back to check out Pima Point, but we were out of steam for more walking, so it was really just hop-on, hop-off. We then took care of some business, including doing our laundry at the campground laundromat, and getting some breakfast food at the full-size (& expensive) supermarket in the ‘Village’. We had an early dinner of pizza and salad (and a scoop of ice cream) and wandered around on the rim a little, ultimately catching the sunset over the canyon at 7:45 pm. We then went back to the cabin, checked our sunburnt spots (bad job on sun screen distribution), showered, and were both asleep by about 9 pm after a long but wonderful day.