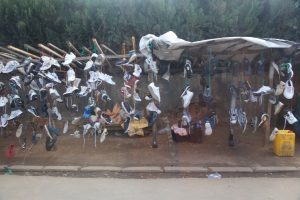 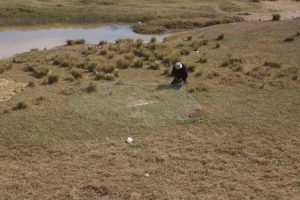 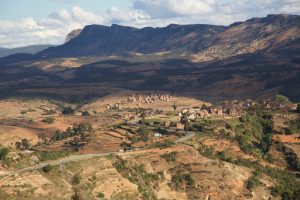 Up 5:00 packed up, breakfast at 5:30, on the road by 6:15.  Stopped at 7:40 so the drivers can eat.  The country outside of Tana is much nicer.  The mountains and hills with the staircased rice patties are right out of a picture book.  We did see another two taxi busses on their sides.  Hope no one was hurt.  Did lunch after about 3 hours. The architecture of the buildings is interesting with very small two story buildings.  The upstairs is for people, downstairs for animals.  Lost service on the iPad by the time I got to CAS.  It was also dark by the time got there.  There was confusion about where we were to put the tents.  We ended up upstairs in a building so the tents are more of privacy issues without protection needed from the elements.  Of course there are no lights in the building either so tents were setup with our head lamps on.  After the tents were set up, we were back down to the eating area.  It is just a roof with 5 12V lights.  Dinner was rice and beans with a few things thrown in.  It was simple but actually rather good.  Played a few card games before calling it a night.  The toilet is just a hole in the floor.  Figures, as I unbutton my pants, the button pops off and almost into the hole.  The belt will be fine and I do have a spare pants, maybe even a spare button. No shower tonight, just a wipe down with a baby wipe.  The whole thing was made worse by no Internet connection.  After dinner, Libby said hers now had a signal.  I checked and got a weak one from where we pitched the tents.  I got my mail and traded just a couple of text messages with Antje.  Even got a text from Josh.