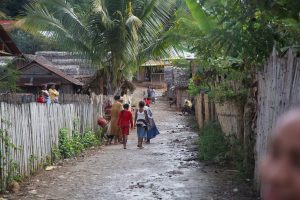 Up 5:45, down for breakfast by 6:00. Rain last night sounded worst than it was.  Rain was rather light by the time we got up.  Moof balls for breakfast.  They are about 4″ diameter bread deep fat fried, slightly sweet.  They gave me 3, managed to eat 2 and a half.  The team started some of the planning stuff and I headed to the hill for an Internet connection.  Signal was good and Antje was still up so we texted a while.  I think that was the longest period of time in which we hadn’t talked with each other.  It started to rain (lightly) so I started to head back down and met with Ian on his way up to get me.  We went down to join the group to plan the day.  Not being able to be in the schools yet, we were attempting to get as many things done as possible.  They managed to create the mounts for the 12V sockets that will be screwed to what they are calling the battery box.  The battery box contains in addition to the battery, the circuit breakers that are used as switches for the lights.  We did put together the breaker boxes also.  There are two schools getting the solar panels installed on this trip so everything is doubled.  There is an issue about when we will be allowed in the schools so next week might be difficult for any forward progress.  Lunch was zebu and rice with shredded carrots.  You also need to be careful with the rice, it sometimes has some sand in it.  I had a bit of a headache so after lunch it was cool enough in my tent that I took an aspirin and took a bit of nap.  Felt a bit better.  We all jumped into the vehicles about 2:00 and headed into Kinjavato proper to talk with the mayor.  Nice guy that just wants to be included in what is going on in his town.  From there, back over to the original school to talk with the guy that is in charge of the schools.  We wanted permission to get into one of the schools early, the other school has national exams next week.  Back to KAFS (where we are staying) by a bit after 3:00.  Things were winding down a bit so I pulled out the iPad and managed to get a connection from the loft (where the tents are).  I exchanged several text messages with Antje and even managed to clear out my mailbox.  Libby came up with a problem about her macbook charger, couldn’t fix it but she does have other ways to charge it.  Went down to the lunch area and played a game of ping pong with one of the locals.  Dinner didn’t serve zebu, it was beans and rice.  Tasted fine, but was too much.  We also had fresh bananas again.  We all chatted after dinner for a bit and headed back to the loft. Sounds carry so well here, I can hear a movie playing somewhere. Might take another bucket shower yet tonight, but maybe not.  It is 7:15 and already feel like I am getting tired.