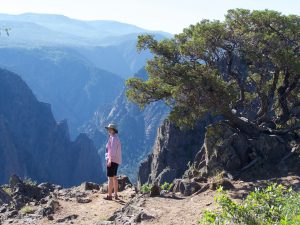 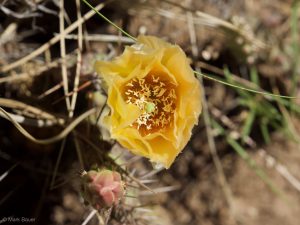 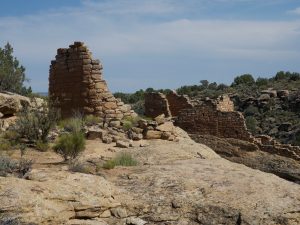 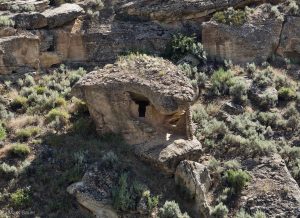 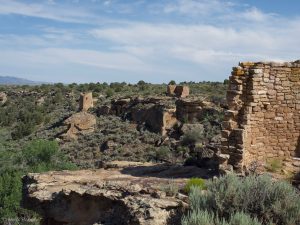 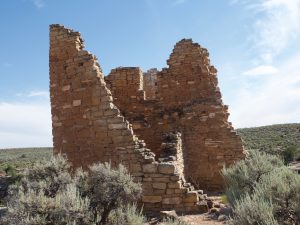 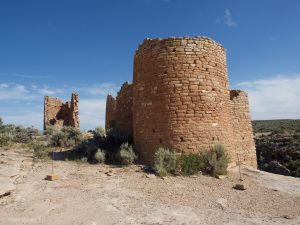 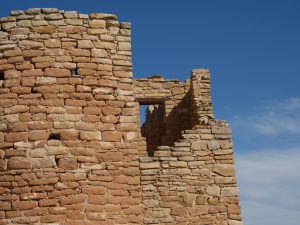 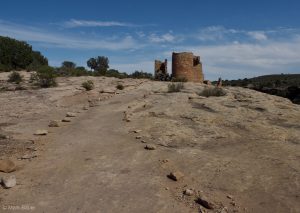 Off to more adventures!  A lovely little breakfast at the “Black Canyon Motel” early on was a good starting point for our return to the National Park, just to do a small hike from the visitor’s center along the rim (my favorite views continue to be the ones where you catch a glimpse of the river down below, rushing along) and through the back country. We also went into the visitor’s center and did something I haven’t done in years–bought something on a trip–postcards and a poster, all in 30s / Art Deco style (but done by modern designers).  The poster features the August 21 Eclipse, and so we thought it will make a great souvenir, since we are “in the path” and definitely watching it.
After this lovely morning walk, we left the Canyon behind and drove the unbelievably scenic route from Montrose to Cortez via Telluride (part of the San Juan skyway).  We stopped a lot for vistas, and since we were just about at Telluride at lunch time, we decided to go up the “box canyon” (= no exit) where this former mining town, now snazzy resort town sits in its full tourist glory. It’s very pretty, with many restored and convincingly faked Victorian “Main Street” buildings, and it was bustling, because we ran into the last day of the Telluride Wine Festival, where people buy $ 75 tickets to have wine and food right on  Main Street from the many restaurants that line it. Thankfully, not all restaurants were just doing their vendor booths, and we ended up having a lovely mediterranean lunch in a shady cafe garden while the $ 75 people sat in the glaring hot sun in the middle of the street.  We walked around in the park at the end of town for a little bit and enjoyed the river that runs through town, but overall, the whole town struck us as a place in a bubble, a wealthy tourist bubble, that isn’t really our thing.  It figures that the lovely town park was built where the old working class neighborhood was leveled.  I bet that many who work in the shops and bars can’t afford to live within a 10-mile radius.  Even Glenwood Springs has that problem, and of course many of the ski resorts and Black Hawk/Central City as well.
As we continued, we saw some of the old mine tailings and other evidence of mining in then and now (just as yesterday, we drove past a hideous coal mining operation that is clearly very active), and it’s always a bit depressing to realize how little people whose bottom line is the almighty dollar have ever cared for the environment, and how much damage the mining and building of the railroads and roads has caused over the years. Given the beauty of this unbelievable landscape and especially this scenic San Juan Skyway route, that’s really sad.
As we moved on past Telluride and out of the alpine climate to the desert to Cortez and the Four Corners area, we were in awe about the radical change in landscape (even though we knew this was coming).  We had been enjoying temperatures in the lower 80s in Telluride, but by the time we got out of the car at the Four Corners, it was 100 degrees.  We walked around a little bit, and looked dutifully at the place where the four states meet, but didn’t have the patience to wait in a long line of people who took pictures of each other and their kids at the four corners point.  Instead, we drove back, and decided on a whim, and BEFORE Wikipedia could tell us what we were doing, to drive to the Hovenweep National Monument, even though that meant an extra couple of hours of driving and walking around in the heat.  That was a good decision, though!  I didn’t know at all about Hovenweep, but it is a site with pueblo-style ruins from around 1200, in a now dry-canyon that had active agriculture (and pueblo architecture) 8 centuries ago.  There are six major ruins there with a trail that explains the various buildings and what we know about the laborious architecture of these people, who are the ancestors of the Hopi, Zuni, and Pueblo Indians that moved further West and South from the four corners area.  What’s still standing is really impressive!
We then drove the long country road from desert through irrigated agriculture back to Cortez, and finally got into town about 6 pm.  We stopped at a Safeway for some groceries, checked into our Econolodge room, made some salad to eat right here, started some laundry, and are now finally wrapping up this long but awesome day.