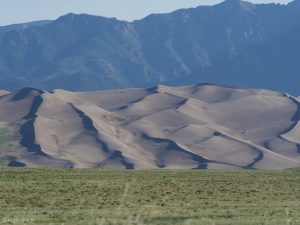 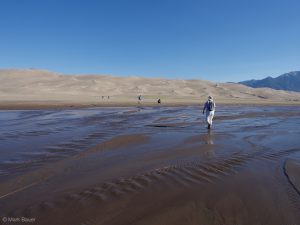 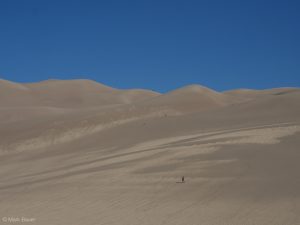 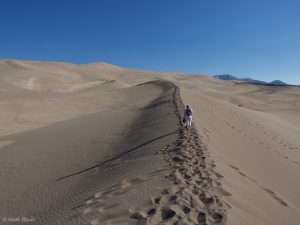 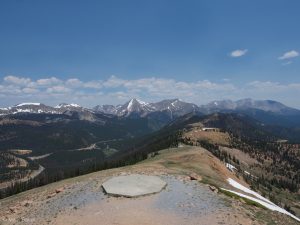 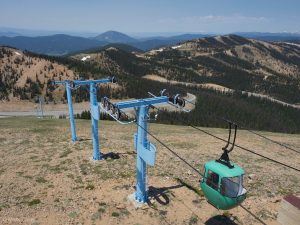 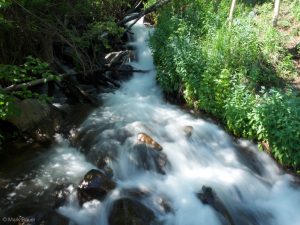 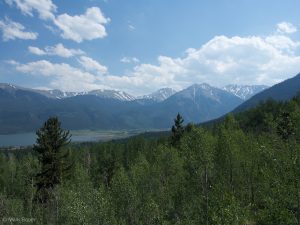 We left our cute little motel in Alamosa early in the morning to get to the Great Sand Dunes National Park early as warned–the sand gets quite hot (150-160 degrees) and we wanted to avoid that!  It’s a 35-mile drive from Alamosa to the park, and we arrived just about 8:15 or so.  Then we checked out the dunes–at this time of year, hikers/ sandboarders (there is such a thing) still need to cross the stream that separates the dunes from the parking lot, and that was both very pleasant (it is currently a braided stream with about 1-3 inches of water and lots of sandbanks, so really fun to cross and look at) and extremely unpleasant, because once it gets to this stage, it starts being a mosquito summer resort, and we were the all-you-can-eat buffet.  We had been warned and had our bug spray at the ready, but even getting out of the car without letting the bugs in was a challenge! Thankfully, once it got dry and sandy and hilly, we left the pest behind.  We walked up a small ridge and watched people sandboard and struggle up hills–which is always a challenge in sand, so there were quite a number of rather whiny kids, even though it does look like the world’s most fabulous sand box and sledding hill.  (The sandboard are for rent; apparently, normal sleds will not work on sand.).
So we kept our visit short; we had planned to hike in a nearby rec area where there is supposed to be a beautiful waterfall–but we realized a short way into the area that our car would not like the very rocky dirt road and turned around.  Instead, we headed north, following one of the rangers’ advice to go up 285 and then turn at Twin Lakes, about 2 hours north.  However, we actually took a really lucky wrong turn in a town called Pagoda Springs after getting gas, and ended up going up to a very impressive mountain pass, Monarch Pass.  Once we were past the pass, we realized our 20-mile mistake (which we had made despite two active GPS systems and the iPad’s maps), turned around, and decided to take the very silly but wonderful gondola ride up a steep hill above the pass, and have our picnic lunch in the little observation deck up there at 11,000 and some feet.  It was very windy, but the deck had a glassed-in area, so we had fun with that!  The tickets even got us free popcorn in the super cheesy adjacent gift store (“in operation since 1954”). Then we went back to Pagoda Springs and turned the right way, taking the Collegiate Mountain Scenic road through increasingly alpine territory to Twin Lakes, which consists of a reservoir, two lakes, and a little village with a historic (i.e. 1880s) mini town.  We got some advice on a hiking trail that wouldn’t take us too long (it was almost 3 pm by then), and hit the jackpot with a very nice feeder trail that led to a part of the Continental Divide Trail (so now we can say we hiked that too, for a mile or so, like the Appalachian Trail).  We had wonderful views of the lake and the reservoir, the surrounding mountains (including Mount Ebert, which is over 14,000 feet and could have also been reached by this trail–the rating of the hike was just a bit beyond us!), and also a beautiful young aspen forest and a rushing stream with a bridge over it.  We went about 1.5 miles in and then back out, and had a wonderful time–little elevation change, sunny but cool (in the upper 70s) and just very relaxing.  We needed that since we are dealing with worrying news from home, where Mark’s dad is in the hospital in Lincoln.
We then drove a large “U’ from Twin Lakes back south and then into the next valley to the East, where Fairplay is.  Mark’s cousins have a cabin there (we’ve stayed there before), and we had called them on the spur of the moment, to see whether his cousin Greg would be here.  It turned out no one was using the cabin, and so Greg suggested that we’d stay there tonight.  We arrived in Fairplay around 6, found ourselves some lovely Italian dinner on a deck overlooking a little lake (we even saw a large beaver swimming around in it), and then headed to the cabin.  Now we are going to have a relaxing evening in much, much more space than we’ve been in for a while (the cabin is really a two-bedroom house, with all the amenities and a detailed instruction booklet on how to turn on the water and flip the relevant fuses to “on”).  There are even about 30 boxes of puzzles to choose from–so may be a puzzle will take our minds off our worry about Mark’s dad.